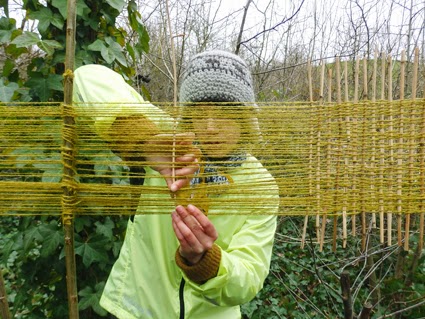 The loom that came to life without its heddle

I have come to eagerly anticipate wintery days spent outside at Stave Hill Ecological Park with Shane, learning how to bundle up freshly harvested willow or using basketry techniques to build a heddle for our loom. All this gleaned while watching Shane’s hands dancing with (sometimes precarious) expertise when pruning or untangling gardening twine between his fingers. I now have the pleasure of sharing my words regarding the day it all came together and we made our first loom at Stave Hill, without the aforementioned heddle!

Shane and I started the morning off aiming to launch our Catalan platter inspired heddle but promptly changed our minds thanks to inspiration from Eric Boudry’s Book of Looms. A method I would normally have used simply to walk the warp or measure out the threads became the backbone of our piece, and once it was in place there was no way we could thread the heddle without cutting loose the work we had already done. 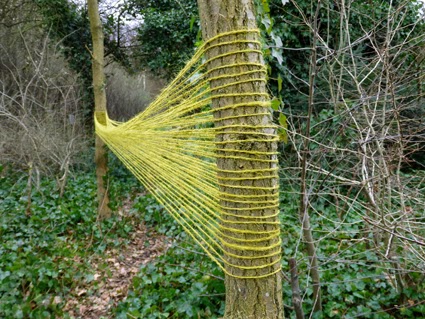 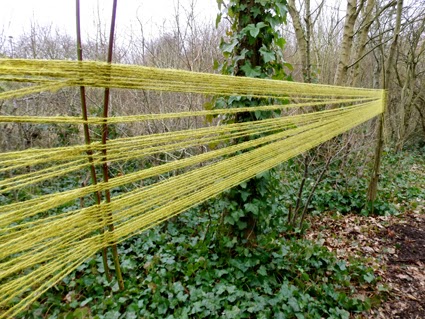 All the hard thinking and speculation was worth it when we figured out how to interpret the illustration in the book as reality on site. We then had to fine-tune it with our hands; fingers repeatedly counted and recounted threads, the warp was combed to equalize the tension and willow cross bars were put in place.

A quote from the same book by Dr Junius Bird, curator emeritus of South American archaeology at the American Museum of Natural History (and possible real life inspiration for the fictional movie character Indiana Jones!) came to mind as we were musing on how to proceed with our making. Bird compares the invention of the heddle to the discovery of fire-making methods. Though the latter is much more significantly recognised historically, “both have an antiquity which, though by no means comparable, still remains a mystery”. It was this mystery we had to untangle and it happened where the areas of our expertise overlapped, with only the means we had available to us at Stave Hill. 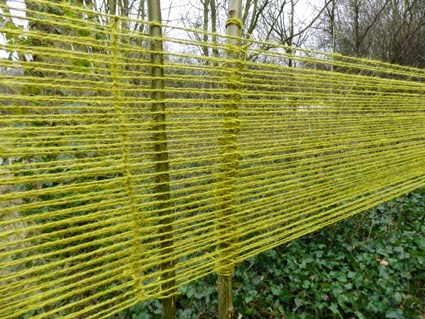 Making a new heddle involved Shane looping an extra bit of twine around a willow pole and picking up alternate threads from the warp. A shed stick was also required to complete the plain weave structure. There was some arguing over exactly how this was to work but we persisted and suddenly the gap required to insert the water reed as a weft materialized

The whole device needed to be operated by two arms moving laterally in opposing directions; there was no familiar up-down movement of the heddle here. The pair of heddle sticks had to alternately stand at ease and then be anchored in the ground to successfully open the right shed. 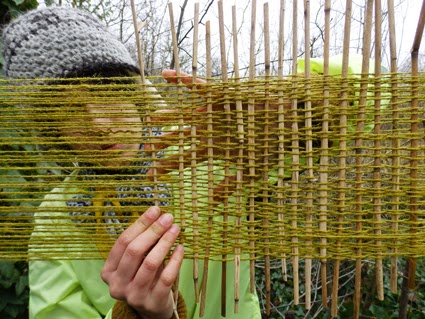 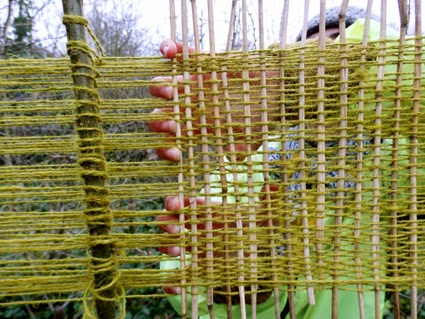 We continuously stepped back to gain perspective on the lines we had created and marvelled at these echoing the vertical growth of the trees. Close up the weaving framed undergrowth, the sky and our bodies alike with the horizontal contours we had mapped.

It is truly a unique loom, one so different to any I have worked with or built before, and which requires a pair of hands on either side of the warp. Weaving using this loom becomes a complex dance for two and a reflection of the working relationship that Shane and I have built up through the exchange of ideas and skills shared during our time at Stave Hill. 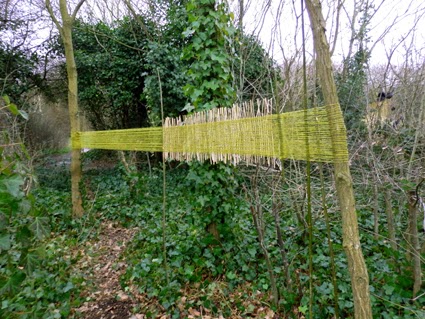 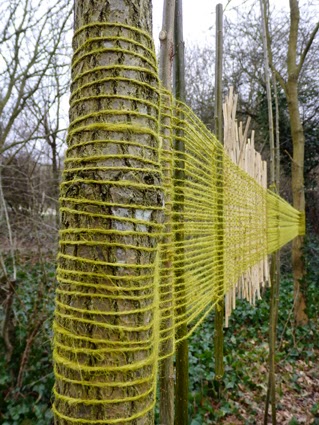 Looking back, it was great to exchange perspectives both verbally in the moment from our mirrored standpoints, as well as afterwards with the physical exchange of photographs. Repeatedly seeing the animated concentration on my face and in my hands, captured by Shane, brings back the magical wonder at making these two trees into a loom with as little as a few willow sticks and some gardening twine.

I can also now marvel at my serendipitous choice of clothing that day  – I could never have planned to echo both the budding moss and the shade of twine chosen by Shane when I donned my fluorescent cycling jacket and sulphur woollens that morning! 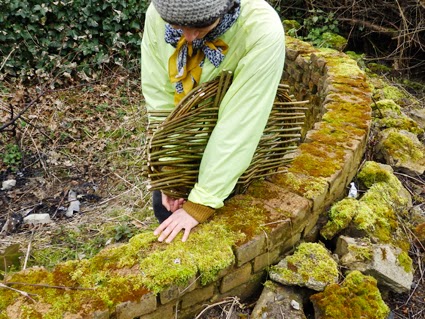