confessions of a hoarder 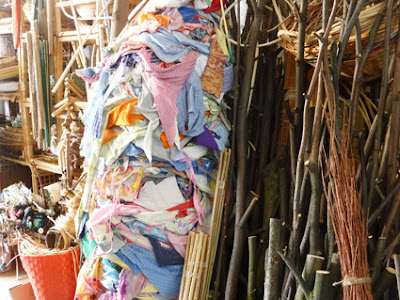 As I am unpacking materials and objects used during Independent Dance’s intensive workshops Sharing Making Moving at Siobhan Davies Studios last well, I have also started unpacking some of the ideas and questions prompted by the these.

One is the question of how sustainable can my practice be given I have a studio full to the brim with stuff and yet I keep producing more things (see website and dailymades) while also bringing in fresh supplies of materials to work with from regular foraging excursions?  I own up to it, I have a big problem on my hands: I accumulate stuff at an alarming rate without being able to throw anything away. 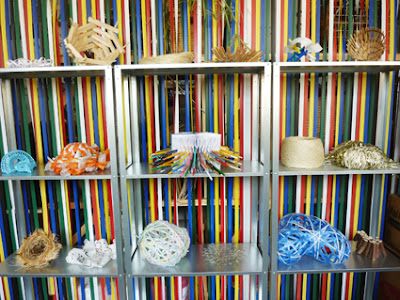 Working with Dancers last week, I’ve realised one thing I love about dance is its economy; the body is the material and steps, routine, choreographic sequences need only be stored in one’s head.  In this lies the answer to my problem I reckon.

One of the participants made a record of what she had made by dancing her object as means of sketching it.  How could these movements describe accurately anything about the making of her object I thought, the physicality of its materials, its outer appearance?  How could the same thing be made again from a simple set of movements? 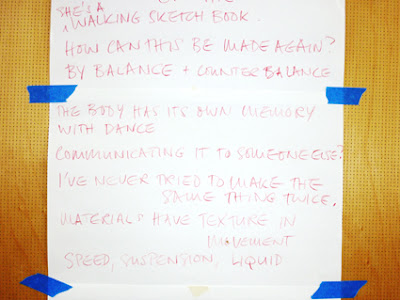 Myriam said her movements were instructions on how to work with the materials.  Her interest when making was to have the materials balance and the shape of the final outcome was of secondary importance to her.  The way she moved described this task.  As for the exact object being made again from her ‘danced’ instructions, she was not worried about that.  Why do anything twice anyway, what would be the point of this she told me.

So here is the answer to my problem: rather than keep all that I make, I should record what I produce as a set of instructions.  These could be rehearsed and memorised, or written down as task cards, or both.  Each time an object is made, it will be like making it for the first time.  It’ll be an exercise in improvisation rather than repetition. Performing the instructions might be a good substitute for the object of course, but that is a whole other question… 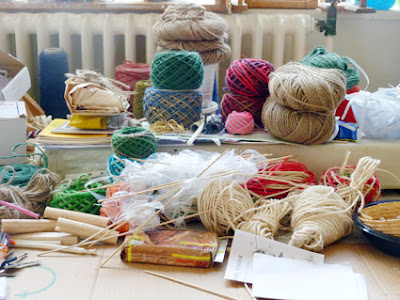 Object probably don’t matter in the end, ideas do, and ideas are meaningless without actions.  Content and meaning for me reveals itself through process, and this means moving as well as making. All going well, my next blog (written from a newly spacious studio, of course) will be titled ‘confessions of a dancer’.