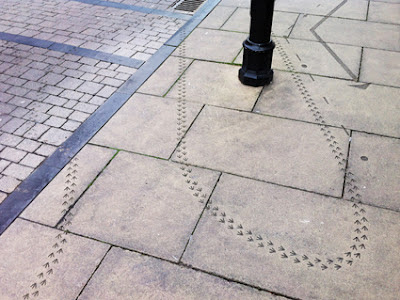 I’ve worked myself up into a state of excited anticipation sending out a group email recently with details of Matthias Sperling’s Walking Piece, which I’m performing at Siobhan Davies Studios as part of the Footfall event tomorrow.  Walking Piece is an installation performance where a diverse group of performers come together to create a single-file loop that continuously circumnavigates the building, passing through a score of playful performative tasks along the way.

I got involved in the project for various reasons.  I was intrigued by its title. Walking is such an ordinary thing, most of us do it, usually without thinking about it. But when you do start thinking about it, it does become rather extraordinary. Walking is not just about moving, it is also about thinking, making a connection with place and site, and also communicating in a social context. 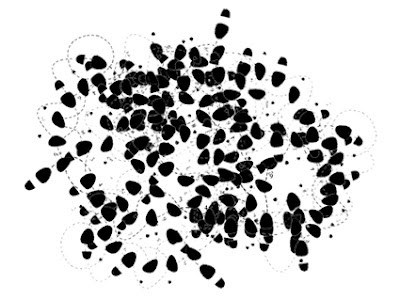 The other reason for getting involved is I recently created a site specific installation at the studios.  A group of three dancers walked up and down the staircase using the metal framework as a device to weave on (click here of details and see previous posts on this blog). I also used the outdoor staircase during the project, so the parallels with Matthias’ piece intrigued me. I am interested in the performance of craft, site responsive approaches to making and developing work and participation, so was curious to get an insight into his way of working.

It’s my first time doing anything of this kind.  I did take off all my clothes for one of Spencer Tunick’s human installation a few years back, accompanied by 1000 other people, but it hardly compares.  It’s also been a while since I’ve taken a dance class. After 10+ rehearsals, Walking Piece does feel very familiar.  However, each time we’ve run through it at rehearsal, it feels like it is being reinvented.  This comes from having to perform tasks rather than remember sequences of actions and movements as we walk through the building. The meaning is in the moment, acting in the present rather than re enacting the past. It is a live exchange between the building, the performers and the audience, and I very much look forward to the ‘reinvention’ of the work happening tomorrow.  Performing Walking Piece throughout the day will be like performing it for the first time again, and again, and again…

This is a radical approach for a maker, and I love it!  It resonates with my own practice where I consider the process as much as product, and prompt social interaction through making rather than simply looking at art.  In Walking Piece, the social dimension of the work is essential.  The tasks become meaningless without interaction from others and become almost impossible to perform.

It’s been fascinating to see Matthias at work, and see how he has shaped the piece over the few weeks of rehearsals, responding to how we performed the tasks and then tweaking his instructions to us on what our intentions might be when performing these.  Much food for thought…  I’ve truly taken my head as well as my feet for a walk, and gained trim legs in the process!